Before I had decided to foster Remy, when I met him at Cat’s Cradle, I noticed a couple lumps on his skin. Lumps are always a concern and should be examined by a vet as soon as possible. So Linda, one of the lovely Cat’s Cradle people, had him examined; the vet determined that the lumps weren’t an issue and that they would most likely go away on their own. I decided not to worry about it.

A week or so later I found a weird little larva like thing on the floor beside his cat cave and another one in the bathroom. After doing some research on the internet (before I knew about VetDirect.com) I decided that he had a cuterebra infestation. I was really grossed out, as anyone would be, and very concerned, so I emailed Linda at Cat’s Cradle and she set up an appointment for Remy at Dean Park Animal Clinic with Dr McTaggart.

A few days later, we were all very relieved to find out that the lumps were not cuterebra larvae, but only sebaceous (epidermoid) cysts. In other words, regular old pimples. And that what I thought were larvae were actually silverfish (another “ew” from me) that Remy had caught and squished. However, upon thorough examination, Dr McTaggart discovered that Remy was approximately 6 years old and had some major dental issues – stage 2 gingivitis, a missing upper canine and the other broken. The missing tooth was the reason why one side of his mouth sits in a sneer, and the gingivitis and painful broken tooth explained why he really didn’t like being scratched under the chin. This had to be taken care of immediately and surgery was scheduled.

Upon returning home from dental surgery (with the bonus of some of the worst cysts being excised), Remy became a much friendlier cat. He now enjoyed minor face, chin and neck scratches and seemed more secure in his surroundings (I attribute this to his being returned to a safe, warm and loving environment in addition to the lack of pain in his mouth).

Remy’s fur was very dusty and oily with a few small mattes near his tail.

The first step was to cut the mattes out. Remy was very skittish and afraid so I took him into the bathroom and wrapped him in a towel. This works to calm a cat down and get the ordeal over faster, in addition to preventing possible scratches. I held him between my legs on the floor, clipped the mattes out carefully and even managed to trim his claws.

A few days later I mixed up some of my Dirty Kitty Cleaner and gave Remy a good rubdown with a cloth. He now cleans quite regularly. 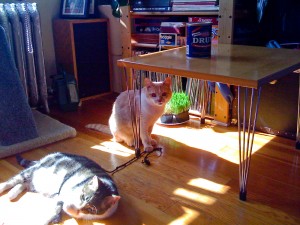 Although Remy has been with people now for about 8 months, he continued to be very nocturnal until quite recently. On the second or third night, just after I had gone to bed, Remy began to play, very loudly, with the numerous kitty toys left near the cat tree. And now most mornings I find them scattered around the apartment. This makes me very happy as it means he feels quite at home.

Kiki’s not always sure about playtime, but occasionally joins in.