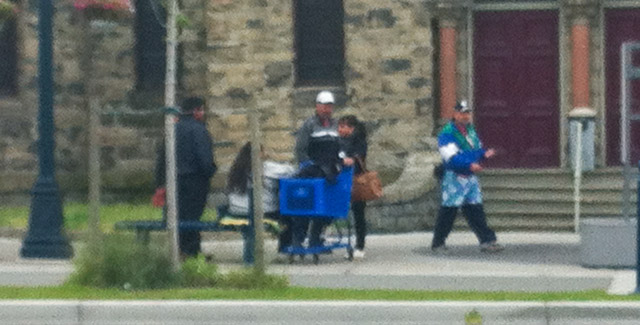 When I walk downtown, anywhere north of Pandora, I walk along the 900 block, home to Our Place (a shelter and aid society) and the Ministry of Human Resources (the welfare office); past the neglected, and often homeless, people of Victoria; I believe it’s important to maintain a presence of functioning people among the non-functioning.

The Broken Window Theory is a good metaphor:

… A broken window left un repaired will make a building look uncared for or abandoned and soon attract vandals to break all the other windows. [It] suggests that the prevention of crime will be accomplished by steps like painting over graffiti, keeping buildings in good repair, maintaining clean streets and parks and responding effectively to petty street crime. These actions make citizens feel safer and when they frequent public places criminal activity is less likely to occur. (Sociology Index)

The theory has it’s critics, saying that it’s over-simplified or that the cause and effect are reversed, but I feel there’s a kernal of truth to it. Being present in the area may help the homeless or addicted feel less shunned/feared by functioning society and, therefore, better able to receive support from it and possibly even return to it.

Jane Jacobs’ approach to creating safe neighborhoods also supports my action. In The Death and Life of Great American Cities, she argues the following (as summarized by The Freeman):

… Complex social orders, such as a city, begin with ordinary people forming informal relations with one another in the neighborhoods in which they live, play, or work. Such networks emerge and thrive when people are able to have free and casual contact with acquaintances and strangers alike in the safety of streets, sidewalks, and other public spaces.

But most of that safety is achieved not by aggressive formal policing but by voluntary recognition and informal enforcement of local norms. The key is for each neighborhood or city district to have sufficiently diverse attractions at different times of the day, what is sometimes today called “mixed uses,” so that there are lots of different people pursuing their own plans around the clock… When it is lively enough, an area becomes safe and feels safe…

Mixed use on the block includes: Alix Gooldin Hall, a church turned performance venue that brings people into the neighborhood at night; Blair Mart, a small, open late grocery store specializing in Middle Eastern goods; and a couple cafes which serve business people during the day. Although not always an active area, the potential is there.

Many of the people I pass say hello, most ignore me. I have never felt threatened, and I am rarely bothered for change or cigarettes.

I may be optimistic, but I like to think that many, if not most, want out of the situation they’re in; that they want to be “functioning.” So if I can help them feel included and considered simply by walking down the block, then that’s what I’m going to do.