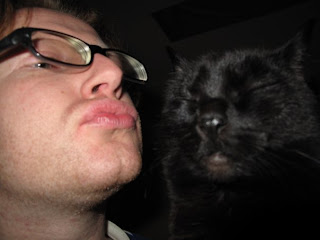 I’ll always remember Owen’s incredulous laugh and cynicism; his love of cats, so much like mine; his great intelligence and sense of humour. He was purposefully well read, and could hold up his end of any conversation; debating a subject, he regularly trounced his opponent.

He introduced me to the gin gimlet (we drank far too many), and the joy of the comic book. He trained me in the fine art of kitty rodeo (a feat rarely attempted by anyone other than Owen).

I’m nostalgic for the summers we spent pulling 8 hour, all nighters at the Prince George Denny’s, drinking shitty coffee and ordering the occasional, waitress appeasing basket of fries, but I wouldn’t do it again for anything.

His ear was available when I needed it; his shoulder when we happened to live in the same town… regardless of the inevitable falling outs many good friendships suffer.

He sometimes said laughingly, “when I die, my epitaph should say ‘I told you I was sick,'” but I always pictured him repeating it as a crotchety old man; thinking of it makes me smile and cry at the same time.

Owen, I am so sad that you are gone, and I will miss you forever.