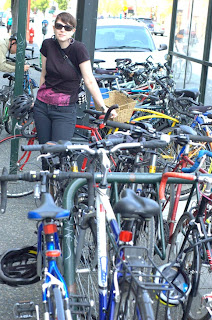 The Downtown Victoria Business Association (DVBA) has announced their Win Your Own Parking Spot Contest.

Really? A parking spot? Encouraging people to drive downtown? What about encouraging the use of transit, cycling or even (gasp!) walking?

“To be a proactive champion for Victoria’s downtown business community, promoting sustainable economic vitality through direct action and advocacy.”

Public Transit (not my area of expertise)

Cycling (I do this a lot)

In the last five years bike lanes have become more common leading to and in downtown. The lanes usually run along bus routes between traffic and parking. This is kind-of okay, but these streets are traffic heavy and the buses and cars cutting across the bike lane increase danger and degrade the quality of the road. Many lanes stop/start randomly, often multiple car lengths ahead of or after an intersection, and sometimes for whole, busy downtown blocks.

Bike parking has improved somewhat in a small section of the downtown core (I’d say the blocks bordered by Quadra, Government, Fort and Pandora), but with the recent removal of coin-op parking metres the options are greatly reduced. I say “Hurrah!” if you’re lucky enough to find a proper bike rack, but those are few and far between and you’re left with the choice of trees, sign posts, fences and railings.

I’ve entered this contest. I’ve used a picture of me in front of the Mountain Equipment Co-op bike corral (same as with this post). Golly, gosh, jeez! Do you think I’ll win that free spot? I sure hope they don’t remove my entry because it might not “promote a positive representation of Victoria” (official rules). Find my pic and vote for me!