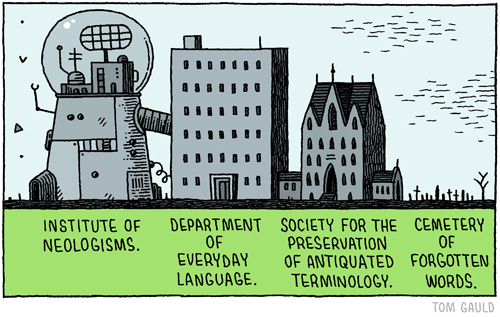 “App” is a neologism. I can’t wait for it to be acceptable in Scrabble.

In language: from Greek νέο- (néo-), meaning “new”, and λόγος (lógos), meaning “speech, utterance”, is defined as a newly coined term, word, or phrase, that may be in the process of entering common use, but has not yet been accepted into mainstream language. Neologisms are often directly attributable to a specific person, publication, period, or event. Neolexia (Greek: a “new word”, or the act of creating a new word) is a fully equivalent term.

In psychiatry: used to describe the use of words that have meaning only to the person who uses them, independent of their common meaning. This tendency is considered normal in children, but in adults can be a symptom of psychopathy or a thought disorder (indicative of a psychotic mental illness, such as schizophrenia). People with autism also may create neologisms. Additionally, use of neologisms may be related to aphasia acquired after brain damage resulting from a stroke or head injury.

In theology: a relatively new doctrine (for example, Transcendentalism). In this sense, a neologist is one who proposes either a new doctrine or a new interpretation of source material such as religious texts.

All above definitions from Wikipedia. Awesome comic by Tom Gauld