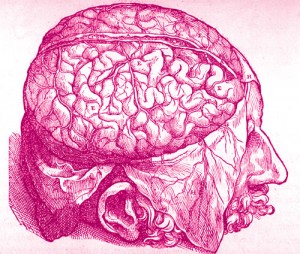 Okay, so I like the word awesome, but one thing the word really describes is the brain. (FYI awesome describes something that inspires awe)

Thanks to my “whole shit tonne” of feeds, I can prove it.

One: the McGurk Effect

A beam of white light is made up of all the colours in the spectrum. The range extends from red through to violet, with orange, yellow, green and blue in between. But there is one colour that is notable by its absence. Pink (or magenta, to use its official name) simply isn’t there. But if pink isn’t in the light spectrum, how come we can see it?

Oooooh, an explanation from somewhere else (actually, it just clarifies the original article and only because they’re super nerdy… I’m not sayin’ nothin’):

The truth is, no color actually exists outside of our brain’s perception of it. Everything we call a color—and there are a lot more than what comes in your box of Crayolas—only exists in our heads. We define color in terms of how our brains process the stimuli produced by a mix of wavelengths in the range of 400–700nm hitting specialized cells in our eyes—”one, or any mixture, of the constituents into which light can be separated in a spectrum or rainbow,” says the OED. Elliot’s article might be better titled, “Magenta is not a single wavelength of electromagnetic radiation in the ‘visible’ spectrum, but our brain perceives it anyway.

And this is where it all comes down to philosophy… wait, but weren’t we just on neuroscience?